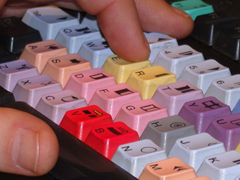 We’ve had the first test-viewing for professionals. After weeks in a dark room with Wouter and his monitors, it’s difficult to judge your own work. It is clear we are not there yet. This time the beginning worked much better, but the criticism was mainly on the story line of two of the characters. The amazing thing with editing is that by re-shuffling and re-cutting you can easily change the story. That is to say, if you have enough material. Which we, after a shoot of five weeks, don’t have. So we have to be creative and solve the problems in another way. (photo; wouter’s fingers editing) 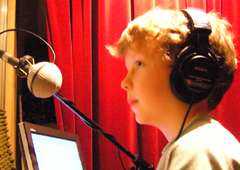 When you work with a kid that had to learn proper English for your movie, unexpected problems arise. As beautiful as the little boy performs, as many problems we have with his speech. So last Friday we did a test dubbing with a little boy, Henry, from the international school. We didn’t put it over the other speech yet. 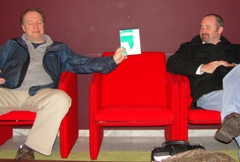 While the film is growing every day the producers are, with the help of experts, working on a plan how to approach the rest of the world. Here too you listen to many voices and advices. Luckily the bond between the producers grew over the last half year and I have the feeling we are all on the same track.(photo made while waiting for a meeting)