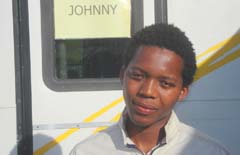 Adri’s thirty-fourth question: From an actors’ point of view….

I went to the National School of art in Johannesburg, UCT Drama School and I’ve worked for a theatre company. This is my first feature film, and I find it extremely interesting. The technical side of it especially… The set up of shots, how they create the perfect lighting and the special effects. It’s amazing. I didn’t expect it to be a very luxurious job, but not quite like this either. When you think about being a movie star, you think that you’d get to sit around a little, and that people will take care of you. And they do, but then you get to the real world and you’re there, 12 hours of wind and sand in your face, and you have to get that shot, so you do it over and over again. I like to be clear on the Directors vision, and coming from a Stage back round, I’m never really sure how to do my first take, but as soon as the first take is done, and I’m directed to do things in a different way, I get more and more into the swing of things. It gets my creative juices flowing as well, and I will try and bring a different element to the character. There is just not always enough time to talk about the roll and make suggestions because we work against elements like the sun coming down, or the wind picking up, elements you can do nothing about. It has really been a process of reaching efficiency in a limited period of time. The Director’s team gives me encouragement by telling me that I’m doing well, and that really, really helps, because it shows me that I’m going down the right route. When I read the script it was really refreshing, even when I just read the synopsis. It was different and there’s an under current of a story behind the story which allows each character diversity. I love the fact that it is so symbolic and not just blatant ‘what you see is what you get’. I found it to be a great script and wanted to be a part of it. I think Threes can be very proud of this. I’m very proud to have landed a part in the first SA/Duct co-production. It has been an affirmation for me that I can do this, where as before I was a little doubtful of whether acting is the way I wanted to go, but just being here affirms it, and also having this talk with you.
(Photo Blessing Mbonambi)