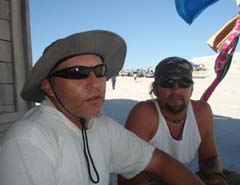 Adri’s thirty-third question: What does Spud (animal trainer) have to say….

The first job I ever did after school was on an ostrich farm. That was about 30 years ago, so I go back a long way with these animals. Mark (sitting next to Spud) has worked with me the most, we’re a pretty good team, and he even looks like an ostrich which helps. Ostriches are temperamental most of the time, you never really know what is going on in their heads (Mark chirps ‘Not much’). They’re not very intelligent, but not completely stupid either, unpredictable too. Especially this time of the year when it’s breeding season, the mails tend to get a little agro. We’re careful around them even when they are tame, because the more familiar they get with you the more they’ll start taking chances. We pick up on signs as to when they’re getting edgy, and we know how far we can push them. We steer clear of situations which puts them under a lot of stress, because they might turn around and attack you. They kick forwards, so if you’re fast enough, just lay flat on the ground. The work that we’ve been able to do with the ostriches on this shoot is better than we expected. The Director and the AD have been very patient and had for a change actually taken note of what we have to say which does’nt usually happen in this industry. A problem that we often find is that people sometimes don’t take the Animal Wrangler seriously, but on this movie it’s been great. People have listened to us and worked with us, and as a result we’ve been able to give them some really good footage.
(Picture: (Left) Spud Murray (Right) Mark Murray)