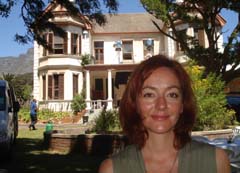 Adri’s thirty-second question: Rachel Young (the line producer): ‘The Bird’ is your first feature film, you must be proud?

I think anyone is proud of their challenge when it’s being realized. ‘The Bird’ is my first feature film, also the first South African & Dutch co-production, and I’m very proud to be part of a project like this. Today we’re in the 5th week of shooting, we have footage, and a week from now I will be looking back saying ‘That was my first feature film. Done!’ I was given an opportunity to make a theory become real and, going back, ‘challenging’ is how I’d de-scribe this production from the beginning. We had a very limited budget and we’ve had to achieve miracles, which mean we’ve had to approach it productively, creatively and ask for a few favors along the way. The crew have been amazing in the way have handled the locations, especially the dunes. The sand gets in everywhere. In your shoes, your hair, your bag, in the cameras, in your teeth, and if it’s not the wind, it’s the heat. It is always 5 degrees hotter out there than in the city. A project like this takes a lot of drive and focus. The Production Department’s job is very much behind the scenes, we make sure that everything is functioning smoothly, harmoniously, and effectively. At the moment it seems to be happening like that so I’m positive that Production is doing a very good job. This film has been a bigger challenge than I thought it would be, but it’s been a fantastic experience.
(Picture: Rachel Young, LINE PRODUCER)