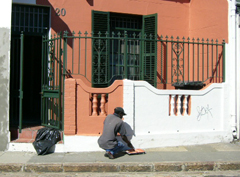 We really have entered into a new period. We’ve moved into the new office, which still gets paint (photo) and the team is growing from day to day. Sometimes I still don’t believe it’s really happening. I look around me and start to laugh. The funniest thing is that everything I say just happens like that. I’m so used to people asking questions, giving comments or starting to argue. Sometimes I’m hardly able to suppress my tendency to ask for something extremely odd or impossible… 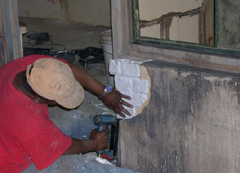 We have several departments in the office.
The art department, busy with every small or big prop, the houses (photo), the interiors, too many to mention really.
The production accountants, who are non-stop behind the computers controlling the money. Sometimes they gain, sometimes they loose money. It’s like the sea; you never know how big the next wave is gonna be.
The production department (at the moment the biggest department); they organize everything. They spit out schedules, make appointments, find new people and try to put the whole puzzle together. It is a complex entity because when you write a script, you don’t realize that every line you write is getting analyzed till the bone. 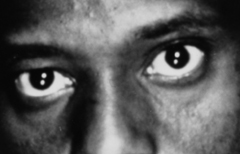 And there’s the casting department; the one that I join the most at the moment. Two days ago an older woman (her skin showing she hasn’t had an easy life) enters the studio, ‘I’m coming for the auditions of the dead body.’ Don’t agents read their emails??? We’re casting the living women (photo) at the moment! And in the script it is stated: ‘June (a beautiful young, blond, woman) is dead.’
Luckily not everything I want is happening.