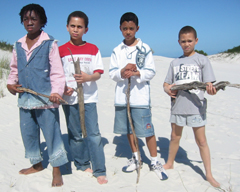 We are hunting… trying to find the right locations, getting the last signatures, selecting the last key crew members, going through loads of photo’s of possible actors and working with imaginary guns with the kids during the casting rounds for little River. 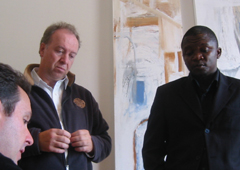 It has been a week full of meetings. Meetings with our main financier (a South Africa bank), with the designer and the constructor for the village we have to build, all kind of meetings. Making a feature film is like building a ‘fairy tale garden’, nothing goes as you think or hope but in the end there is always a solution. By the way, we found out that ‘The bird can’t fly’ is going to be the first Dutch-South Africa film-coproduction ever. (photo producers Anton and Joel with the bank man) 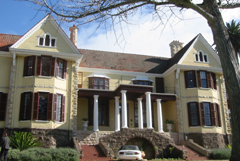 With the location scout we had to find a building that looked like ‘Trovato House’, the one that I want to use as the prosperous hotel in the film. But it had to be old, run-down, and it must be possible to fill it up with sand. Something not many villa owners like… If we couldn’t find it we had to build it – for which we don’t have the money. 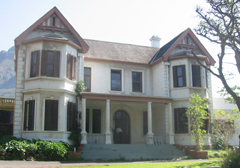 But we did find the place. Inside the ceilings come down, the wallpaper peels off the walls and the owners don’t mind a few trucks of dessert sand inside.