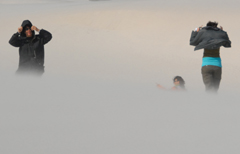 We could hardly see a thing when we were on the dunes, but down in the pit Bertus, who grew up in Atlantis and is these days the official responsible for the area, told us about the power of the wind and the movement of the sand. My fantastic little valley, which I found two months ago, had changed so much that we had to find a new location. Which we did… even more beautiful, less windy and therefore less vulnerable for changes; and close to the main entrance.

Guido (camera), Birrie (art department) and I went back to the new location and ‘draw’ the entire village into the sand. But again the strong wind played with us. It blow away most of the lines before we were even finished. The nice thing about this strong South-Easter wind is that it brings good weather and on Friday all of a sudden the people in the office were all dressed in summer clothes, while I still was wearing a sweater.

Everyday Guido and I had meetings with possible crew people, gaffers – focus pullers and key grip. During the week a beautiful team for the film starts to be formed. I’ll discuss our choose with Leigh, my 1st AD, who knows everybody in the South African film industry. 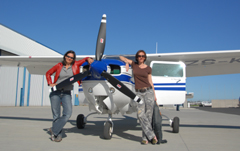 A supply company offered us a flight over the dunes. For the first time now I understand the geography of the area where we are going to shoot. When you’re in it you feel that you are deep in the desert, but actually it is just a small area of dunes next to the Atlantic ocean. From the plane we saw several whales swimming and when we wanted to land ostriches blocked the runway. 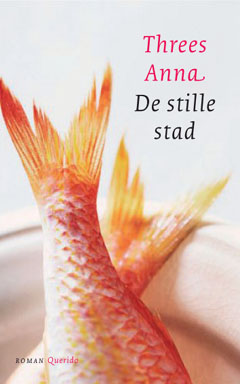 This weeks most important news: The launcing of my novel “De stille stad” (The Silent City) is postponed due to technical reasons but on the 15th of september it will be in the Dutch bookstores!!!!