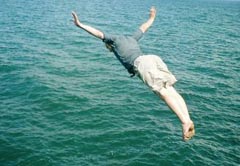 How to get a rational human being totally crazy? Let him make, as his debut film, an international feature, with several producers and a Hollywood star.
Today is the dutch ‘Day of Freedom’, when we’re supposed to celebrate all good things that started from the day World War II was ended. ‘Freedom is won on a war that never sleeps,’ as the new song by Thé Lau runs.
I didn’t update my weblog for a while because I expected any day the final decision. But even with the daily contact I maintain with my producers, I didn’t get the definite YES or NO yet. Four weeks ago the agents wanted more money on the back end (in the form of box office bumps); last week they suddenly wanted different conditions in terms of accommodation, trailers and an exclusive driver, and two days ago they started re-discussing the fees. It seems everybody forgot we already passed the deadline again.
So instead of diving blindly from a rock or getting crazy, I rent the little writers-house again in the south of France. In three weeks I´ll start writing my new novel.