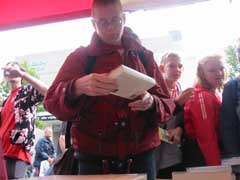 Sometimes I think my career is changing course. Instead of making films I’m getting more and more a novelist. I had to sign books on the Uitmarkt, the opening of the cultural year in Amsterdam.

The 1st of September was my deadline to hand in the manuscript of ‘Motormoeder’, my second novel. Exact 09.00 that morning I send it by email to my publishers. Their planning is to have the editing done by the 1st of October, so they can start the publicity.
The next day the new budget for my film The Bird Can’t Fly came in. My producers halved the budget. This has of course influence on the film, though not as much as one would expect. The biggest change is that instead of working with a Dutch crew I’ll work with an entire South African cast and crew. The only foreigners on the project will be Barbara Hershey from Los Angeles (female lead), Eamonn Walker from London (male lead) and me. The postproduction too won’t be done in Holland but in South Africa. This means that if the project finally will get started, I won’t be home for more than half a year.
It was not the first time the film was postponed; actually it did happen three times up to now. Every time I have to keep huge periods free, during which I can’t accept long-term projects, because if the film is going to be shot I have to be available.
Luckily I’m able to use more media. Writing renders you the freedom that you can stop or start whenever you want. And because my head is full of stories, I started a new novel. This one will take place in Tokyo, where I lived in ’86-’87. It’s important that I go back there to do research, but as Tokyo is the most expensive city in the world, I applied for a grant.