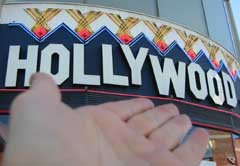 Tendeka (one of my producers)and I arrived in Los Angeles on the night of the Oscars and I’d forgotten what a strange world Hollywood is. A spot of excessive wealth in a poorly environment. We had booked rooms in the Beverly Hills Hilton; finally I was going to meet Barbara Hershey, and we had to do it as how it’s done (although personally I prefer other places to be). The next morning the hotel was overcrowded with important looking businessmen, all talking in their mobile phones. After some searching I found a quiet place for our meeting; some chairs under the palm trees nearby the swimming pool. I was very nervous because this was my only chance to convince Barbara Hershey to be the lead (Mrs. Melody) in my film.
But when she entered the huge lobby, she had nothing of the world around her: in front of me stood a beautiful and modest woman and I knew it immediately… this is ‘my’ Melody. 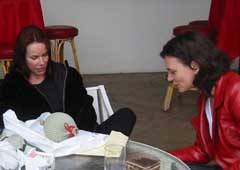 For two hours we talked about the script, her role, my ideas and how to realise all this. It was very clear we were on the same wavelength. And when, at the end of the meeting, she said ‘Yes, I really would like to play this role,’ I must admid I was not surprised; I already knew it. Melody is an ageing woman, but Barbara looks much younger then she actually is. Therefore we will need to give her a bit more age; but her personality is exactly the one I was looking for. With her on board I can make the next step; forming the rest of the cast around her.