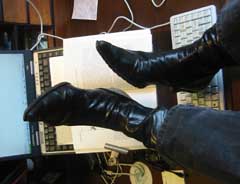 The last few days I tried to close myself off, and worked on my new book. It was hard to switch the button but this morning I really got into the flow – when I got the news: Barbara Hershey wants to meet me in Los Angeles. I jumped as high as possible, sitting at my desk. Phone calls are made, up and down, between South Africa, Ireland and Amsterdam. Then also the bad news comes in. The English tax scheme has suddenly changed. Not only me, the whole English film industry is suddenly confronted with a very big problem. Part of our budget was based on that money. Suddenly the strategy changes; we go back to the Dutch tax scheme.
It always seems to be: two steps ahead, one step back.

Two days later: Because so many of you react on my news about the financial situation of my film here an article to explain what’s going on. In the end it seems that for my film it is not as bad as I thought

BERLIN — The British film production sector was plunged into crisis Tuesday when the government suddenly outlawed some of the U.K.’s biggest tax equity funds, effective immediately.

Bombshell, which came with no forewarning on a day already being called “Black Tuesday” by some producers, could trigger the collapse of numerous movie projects near or already in production.

The move will affect the financing not only of indie pics such as Johnny Depp-starrer “The Libertine,” due to start shooting next week, but also of big-budget Hollywood studio movies.

These latter include John Madden’s “Tulip Fever,” Paul Anderson’s “Alien vs. Predator” and Ridley Scott’s “Republic of Heaven,” which were all set to receive as much as one third of their budgets from these funds.

At best, such projects will be forced back to the drawing board to restructure their financing; at worst they could be postponed or stall completely.

By a change in accounting rules, the government has closed Ingenious Media’s Inside Track fund and Grosvenor Park’s First Choice, as well as blocking more than a dozen new players in the middle of raising coin.

As producers were flung into a panic, industry lobbyists scrambled to open negotiations with the government for a transition to ensure Inside Track and First Choice can at least honor the financing commitments they have already made.

“We are now scheduling a meeting with the Inland Revenue to discuss the possibility of introducing transitional arrangements to protect films currently going into production where complex co-financing arrangements have been put into place in good faith by bona fide industry investors,” said U.K. Film Council chief exec John Woodward.

Instead of using the film-specific Section 48 tax break, Inside Track and First Choice were using generally accepted accounting principles (GAAP) to write off production costs as tax losses.

Inland Revenue, the government’s tax collection arm, will no longer permit this.

That decision does not affect film financing through Section 48 deals, which continue to be allowed until next year. But with Section 48 timed to expire in 2005, many specialist tax financiers had already abandoned Section 48 structures in favor of their own GAAP funds.

Inside Track and First Choice were the two pioneers of the GAAP model.

In the past 18 months, Inside Track has co-financed Working Title’s “Wimbledon,” Mira Nair’s “Vanity Fair” from Focus Features, and a whole slew of Pathe movies including Gurinder Chadha’s “Bride and Prejudice” and Danny Boyle’s “Millions.” Current Inside Track productions include John McKay’s “Piccadilly Jim” with Myriad and Madden’s “Proof” with Miramax.

Where Inside Track has focussed on working with studio-funded movies, First Choice has backed indie pics including the upcoming “River King” starring Ed Burns, and “The Libertine.”

For producers, the GAAP fund money bridged the substantial gap left by the collapse of the pre-sales market over the past couple of years. For Hollywood studios, it has provided an extra incentive for locating major movies in Britain.

Even if the government agrees to protect financing for existing projects, the death of the GAAP funds will likely lead to a significant contraction in the level of U.K.-based production,with negative results not just for producers but also for post-production houses and talent agencies.

“The U.K. Film Council has consistently argued for specific and tailored tax relief for British films, and we are now focused on the details of a replacement mechanism for Section 48 relief,” Woodward said. “Today’s announcement from the Inland Revenue clearly re-emphasizes the need for film specific tax relief, which is part of an agreed policy to assist the film industry.”

Some industry figures, still struggling to digest the implications of the Inland Revenue’s announcement, were predicting “an absolute meltdown” of the production sector.

But Film Council sources, cautiously optimistic about the prospects for a transitional deal, suggested the situation was “a crisis, but not the end of the world.”