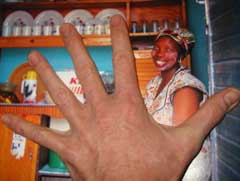 New Year, that all our dreams will come true!
My project in Oldenzaal got a supplement. On 31 December a special page about me came out. They asked me to write one more article and people who’re pro or against me wrote the other pieces. I never could have thought my columns would have such an inpact.

While most people were sleeping late through their hangover, on New Year’s morning I finished my second draft of War for a Kiss. It’s now off to some readers for feedback.

It’s 20 more days before the main actress for my film The Bird Can’t Fly will answer. When she’ll say yes, hell (!)will break loose and all of us will have to be ready in order to start shooting in April. If not, again we’ll have a serious delay. But we can’t take the risk not to be prepared, so for the first time since a year I read my script again. Luckily I still love it, although I think I have to rewrite some small scenes. Yesterday the cameraman and me had our first official meeting. We mainly talked about the atmosphere I want to create. It’s gonna be a film about normal people in a strange world, a world disappearing under the sand. Before we can go on talking through every scene, I’ll first have to do some rewriting. So here I am, behind the computer again…