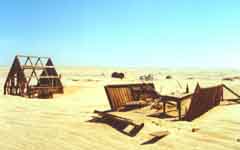 Left overs from a diamond mine. (Photo made by N. Dreyer) I think my film, besides being a dramatical story, is a very visual focused thing; therefore the cameraman and the designer are very important for me. A long time ago I did a lot of research in finding the perfect designer. And I found some very good ones. But they are based in countries all over the world. Some I never met, and with other I talked for hours. Now my producer told me that we would have to spend a big part of our budget in Holland. Strange idea; suddenly I have to cross out many names on my list. And I’ll have to focus on the Dutch designers. Luckily I have some good ones on my list too. My producer gets a bit confused because of my lack of knowledge how to behave in the filmworld. I suggest that we send the script to several designers and asked them to make a plan, so I can get an idea how they work. But she didn’t like that idea at all. You have to choose them from their previous designs. Of course I understand, but then again I don’t know how they work, how they think and how they are. She convinced me that I couldn’t do it the way I wanted. I know! It’s my first feature and I have to trust my producers and their choices. Sometimes I do, sometimes I don’t. Today I had lunch with a production designer that I met once before and liked very much. He was on my list of favourites. I wanted to know what he thought about the script. I wanted to know what happened in his brains. I wanted to know if we would have a connection. And we did. He came with precisely the sort of questions and ideas I liked. My brain started to work. He understood the edge that I want to see. The timeless and placelessness (is this a word?). But there more designers are reading the script. I have to wait for the other reactions.