Dogtroep is a company of visual artists creating location specific theatre. Dogtroep was founded in 1975 by amongst others – Warner van Wely, who developed a self-willed form of theatre out of protest against the inaccessibility of regular art. Images and music were central; text hardly played a role. (Photo: Threes Schreurs, Jos Zandvliet, Lino Hellings en Henriëtte van Reesema in Leningrad 1989)

In the first years Dogtroep manifested itself with a wide range of performance forms: In addition to theatrical spectacles they held concerts, parades and unannounced audience infiltrations. Warner van Wely was artistic director until 1990. In his book Dogtroep: Werkwijzen van wild theatermaken (Dogtroep: The art of wild theatre) he describes the working method he developed in those early years. (Photo: Ko van den Bos and Threes Schreurs in Broederstrijd 1991)

After Warner’s departure Dogtroep changed course. The artistic leadership was taken over by Threes Anna Schreurs. The work took on a more dramatic approach and the projects tended to be more ambitious. The group concentrated on performances at unusual locations and played longer series than before. Dogtroep travelled from sheets of water to sandy beaches, snowy hills and gigantic factory buildings. This expansion had an extra effect on the artists; it challenged them to become specialists. (Photo: Anjan Anker, Jos Zandvliet and Threes Schreurs La tete d’eau. 1992 Les Arces)

Partly because of the growing attention of television Dogtroep became well known to large sections of the population. Invitations to the Olympic Winter Games in Albertville, the World Expo in Sevilla in 1992, the Frankfurter Buchmesse in 1993 and the International Theatre Festival in Chicago 1994 established the reputation of Dogtroep as an important Dutch cultural export product. In the Netherlands in particular, Dogtroep created a distinct profile for itself in this period with the open-air performance ‘The Mandarin’ that draw an audience of over 65.000 spectators at the major summer festivals. (Photo:Andrea Violato and Hannah Fox in Noordwesterwals 1994) 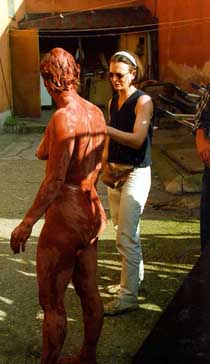 In 1994 Dogtroep played for a month ‘Noordwesterwals ‘ (‘Northwester Walz’), at a slipway of the former NDSM shipyard in Amsterdam North. The team that made this performance was ? as is usual with Dogtroep ? of international composition and consisted of 30 collaborators. ‘Noordwesterwals’ was a spectacular performance with 1.2 million litres of water in the lead. The reprise followed in 1995. In that same year Dogtroep made the film ‘Noordwesterwals’ based on this production. (photo: Last directions to Ada Plinck for Assimil 1995)

After four years of adventurous performances at incredible locations the significance of the location started to play an increasingly important role. Immediately after ‘Noordwesterwals’ in 1994 Dogtroep left for South Africa at the invitation of the Arts Alife Festival in Johannesburg. It was directly following the first elections and the country was bubbling with hope and faith after many years of ‘apartheid’. There was also an intensive co-operation with the former multicultural Yugoslavian group KPGT. This resulted in the coproduction Assimil in 1995, performed in an old sugar factory in Belgrade during the war in former Yugoslavia. At the beginning of 1996 Dogtroep performed the production ‘Kulhave Tango’ in the Prague theatre Archa Divadlo together with Czech artists. 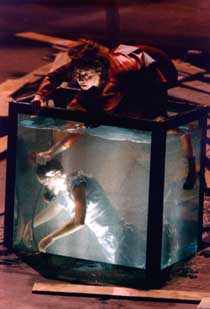 In August 1996 Dogtroep made it’s first major production in a theatre. This happened in the Royal Theatre Carré, the most famous theatre in the Netherlands. Dynamo Mundi was made especially for Carré and was performed over a five-week period. Dogtroep approached this theatre as a location; the theatre was closed for one month during the preparation of the project. Changes were literally made in the building itself: a hole in the roof was made in order to descend a fourteen metre-long iron sling from the ridge, among other things. There were 32 sold out performances that were visited by over 45.000 spectators.
(photo: Hannah Fox and Csilla Lakatos in Dynamo Mundi 1996)

In 1997 Dogtroep made ‘Adder Zonder Gras’, a spectacular opening for the rebuilt Academic Hospital in Groningen. The complete façade of the building was used for this performance and the show had a cast of 80 actors, partly hospital staff. ‘Adder Zonder Gras’ was performed 18 times for the complete hospital staff and other inhabitants of Groningen, with a total of over 20.000 people.

In addition to the permanent staff Dogtroep usually works together with a group of “regular” freelancers. Furthermore there is a varying number of artists from several disciplines cooperating with each production.

Large projects are often developed on location. Dogtroep projects start without a fixed story; the location is the starting point and the story tells itself from the moment the group arrives at the chosen place.

During the nineties, under the management and guidance of Threes Anna Schreurs, the preparation of a production on location took up about one month. Firstly a workplace and a production office were set up on the site. After that the project starts with a brainstorming session during which the collaborators react to the environment and to each other’s ideas. These ideas are the ingredients for the script. Only in the last phase is the final script put together. 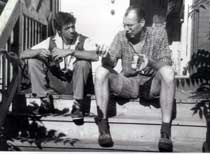 At the start of 1998 the group realises that it is time for a change. Popularity increases and there is a lot of work. Dogtroep produces at a very high rate, from small intimate research projects to gigantic spectacles. But the company of visual artists thinks far ahead; they need to amaze themselves time and again. One realises that the performances are starting to become a standard formula and nobody wants that. The artists want to continue to develop themselves and their company. Dogtroep is on the verge of great changes, when completely unexpected changes of a different kind falls into her lap.
In March 1998 two members of the permanent staff, light designer Marco Biagioni and leading actor Wieger Woudsma, are killed in a fatal accident in France during a canoe trip after a day of hard work. (Photo:Marco and Wieger drinking beer after the last show in Chicago 1994) 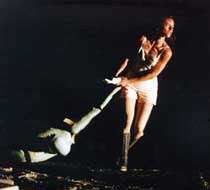 The ‘golden team’ of the nineties makes one more big performance in its damaged composition. It is called ‘Hotazel’, a name based on a small lonely town in the Kalahari-desert, where indeed it is hot as hell. The death of Marco and Wieger will become the source of inspiration for this last performance; the open-air performance is an homage to both core members, and results in a dramatic and silent performance in which the transitoriness of life is made visible.
Dogtroep performs ‘Hotazel’ in the summer of 1998 during the Oerol Festival on the isle of Terschelling, as well as in Groningen, Amsterdam and Deventer. The show is performed 48 times, for over 50.000 visitors. For Threes Anna Schreurs, the life partner of Marco, it will turn out to be the last performance she will write and direct for Dogtroep. (Photo: Csilla Lakatos in Hotazel 1998)

Jos Zandvliet, composer and artistic collaborator from the first hour, is the only member of the permanent staff who stays. From January 1999 on Dogtroep starts to work under the leadership of Titia Bouwmeester with a completely new permanent staff. Contemporary developments can be followed on www.dogtroep.nl.