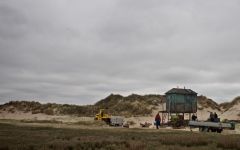 For two weeks we filmed on Texel, in one of the most beautiful national parks in the Netherlands, the Slufter. Because it is breeding season we worked under the strict control of SBB, local bird protectors and an ecological inspector. Filming in May is important because it’s a story about a solitary man who lives with and among the birds. 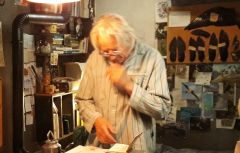 Last week we moved our entire circus into a studio on the outskirts of Amsterdam to shoot the interiors of the film. It took a while to get used being locked up in a tiny room full of stuff after the greatness of nature. But soon also this claustrophobic space became beautiful.

When we’re finished in Amsterdam we go out to sea. Because my new film, with Freek de Jonge as the main character, is playing far away on an tiny island!

Link to a news item.