Four and a half week I’ve been on a large container vessel crossing the Atlantic, a rusty old ship, carrying the flag of Gibraltar. I went on board in Montevideo (Uruguay). After passing several harbours in South America and Africa, I’m back home again in Holland. 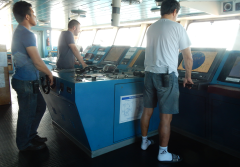 For several weeks I was living in an absolutely male dominated hierarchy community. It was a special experience. Especially with a superstitious captain who believes whistling gives bad weather and women on board bring bad luck. It is true, we’ve had some problems. Twice the ship stopped in the midst of the ocean and we were drifting back with the current to Brazil. In Dakar (Senegal) some special technicians were flown in with spare parts. But a few days later, again one of the engines gave up. In Africa the ship became an impregnable fortress, against potential refugees. 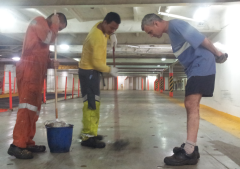 It all was part of the experience I hoped to find. More difficult was seeing the racism, exploitation and working conditions on board. The charming macho Bulgarian officers who loved to drink their home brewed rakia in one room and the shy Filipinos filling their evenings with singing karaoke songs full of homesickness in another room. Filipino sailors must sign contracts for minimal 8 months, sometimes even longer, and afterwards they get only two months leave. The Bulgarians not, their contracts are much better in terms of money and conditions. Imagine the Filipino cook and mess man had to work every day – 8 months in a row. Not even one free day! And always with a smile on their face. A submissive smile. 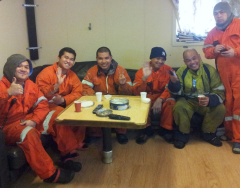 I thank all of them for the insight they gave me of their world, because – although I don’t know when – one day this experience will end up in a new story.

The day I arrived I immediately went back to the sea. Shooting some special shots for a long-term film project about a fisherman.