I just finished a short tour with Platina Blues to Georgia and Belgium. In Georgia it was a film festival for cameramen. The atmosphere was different from common film festivals. Discussions were all about the technical approach of films or shots. I loved it, and followed some great master classes. We were nominated for the most risky shot, since Platina Blues is a one single shot of 40 minutes, but there was Czech cameraman with an even more complicated shot!

On the Film Fest Gent we had our Belgium premiere, which was special. Now it’s time to say goodbye to this movie, travel back home where my writing table is waiting. I hope there won’t be any more serious interruptions before I finish my new book, because I’m longing for a long period of concentrated writing. 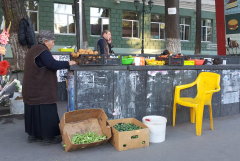 Always when I visit new places, I find (even in a beautiful city) the most ugly chair of the world. I just don’t understand why we humans let this horrible thing spread over the world like an epidemic. But for the fans here some new ones from Ghent and Tbilisi.