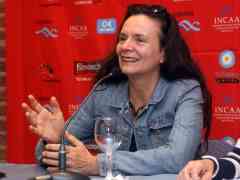 The International Film Festival in Pinamar, which had invited me with my film ‘Silent City’, gave me the opportunity to visit a new continent. After the screenings, meetings and interviews I went to Buenos Aires. (photo Giovanni Sacchetto) 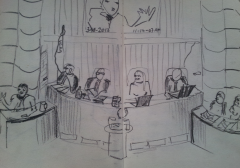 Here I did some pre-research for a film I’m asked to direct. This project deals with tango and the consequences of the junta regime of Argentina (1976-1983). I saw many tango milongas and the horrible leftovers and monuments of the dirty war. I made drawings and loads of photos and films.

Immediately after I took a break. My first real holiday in 6 years. I needed to get my mind free before I’m starting a new big project, which I soon will do.
And for the fans of my plastic chair project a lot of new ones (see the tango dancers on the photo:
In Buenos Aires (1) and Buenos Aires (2).
In Pinamar during the film festival. Also in Pinamar.
Loads of photos I made during my trip in the Andes, where plastic-chairs are seldom stanidng outside because of the severe wind and burning sun ( Andes 1 + Andes 2 + Andes 3 + Andes 4).
Also in Salta a city in the north west of Argentina. And Iguazu in the north east.