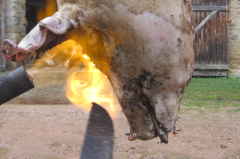 Normally my research takes place before I start to write. But the autumn slaughtering of the pig in France had been cancelled twice. First time because the butcher had cut into his hand. Last year because I was shooting ‘Silent City’. It was originally planned as part of the research for my novel ‘Het laatste land’. For them who already have read the novel, know there is no slaughtering in the book. For them who haven’t read it yet, click here. 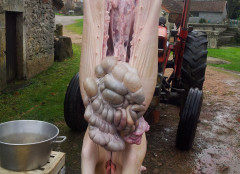 For me research is always a very big part of the writing process. It is the time when I develop the story while I’ll travel to places and come in situations I’ve never been in before. I’m sure that one day I will use this experience of the slaughtering of the pig. The butcher was the best of the district and people travel long distances to eat the meat he cut. We slaughtered outside on a farm. I learned a lot. 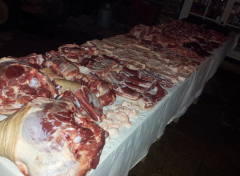 And even if I hardly eat any meat, I’ve been eating some of it to understand the mastership of the butcher. Have you ever eaten diaphragm? 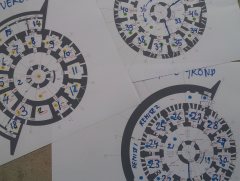 Coming months I work on a series of short stories for KunstFort Asperen. I hope I manage to make what I have in mind, because it’s more than a complicated puzzle. For the fans of my already ten year old chair project . Here new ones from the middle of France.