Early this morning we took the last shot of ‘Silent City’ – again on an extreme full platform in the subway. But we’re so exhausted and worn out that it took an hour before we realised it. 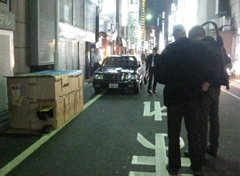 This last week in this huge and hectic city, Tokyo, we’re most of the time filming on the streets. Driving from selected location to selected location – shooting all the images that I’ll need. I was a bit nervous for the shoot in Ginza. The real estate here is far out the most expensive of Japan and we placed a cardboard house (like homeless people here use) and placed it in a street full of exclusive nightclubs. A lot of these clubs are run by the Japanese mafia and I was sure they didn’t like this image of poverty in their posh neighbourhood. But they just ignored us and probably thought: weird foreigners! 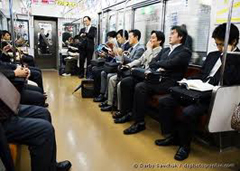 Everyday we shot bits and piece in the subway, because I need lots of different situations: full + empty, day + night, businessmen + youngsters, etc, etc. Since it is forbidden to shoot in the metro we always had to do it sneaky. Yesterday night when we made the last shot with the lead actress we’re so fed up with of all the rules and regulations that we just shot and… they didn’t arrest us. Probably thought: weird foreigners! 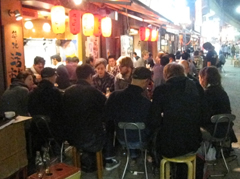 When we left Luxemburg and came to Japan we left most of the crew and the cast behind. Yesterday again we had to say goodbye to a few. Tonight we will have a little goodbye diner, before we will fly home. It’s amazing that we shot it all, it went so fast, almost like a dream. (diner of crew + cast on one of the locations of the film)
I’ll continue my tweets @threesanna but not so frequently.