From the first day on (when we were searching for locations) I had to convince everybody that I only could tell this story if we would shoot it in tiny spaces with low ceilings. Because after my first feature film, which was shot in the endless desert, I want to make a story with a claustrophobic feel. 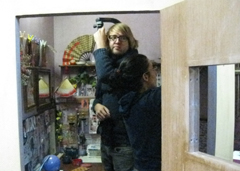 But working in small rooms isn’t easy. It’s not only the actors in the room. During a shot there are also the cameraman, the focus puller and the sound man. And before the shot even more people have to be together in that same small room: the 1st AD, the set dresser, the wardrobe, the make-up and continuity ladies, 2nd camera assistant, my assistant and me, and sometimes also the stills photographer, the light man, an animal handler or others. Being with so many on a few square meters create ingenious dances from the crew to prepare the ultimate moment. 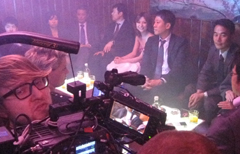 We worked this week in a small nightclub, a tiny apartment, a minuscule bedroom, a pint-sized office, a little launderette, a small kitchen and restaurant and a toilet… Almost all these sets are built by the art department, but I’m convinced that people when they will see the film don’t realize this at all. 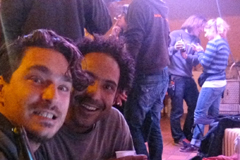 We’ll start now our last week in Luxemburg before we travel to Tokyo. We’ve passed the halfway mark. For the live making of, with many photos – follow me on twitter @threesanna