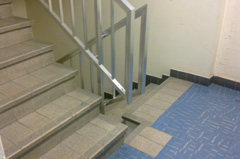 The first week in Luxembourg was exciting, stimulating and inspiring. After all the problems we have had with the locations for ‘Silent City’, we finally found most of them. I trust we’ll discover the last too, but it is not always simple to find places that can be Tokyo. 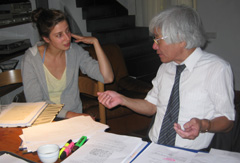 The art department has a very difficult job, not only because the budget is small, but also because the final locations came too late. Every day I see their storage growing fuller with Japanese junk and their team getting bigger with carpenters, painters, etc. We have had several rehearsels with actors, and the costume department is working at full speed.

The production department is working day and night to make schedules and plans to get all the Japanese actors here on the right time, to have all the locations on the right days and to have the international crew here with all their equipment. 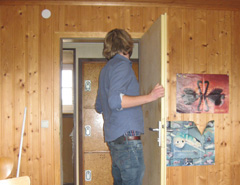 The last days I’m mostly working with the cameraman and my assistant. Scene by scene, shot by shot we talk about all the details, move doors (photo). We have to be extremely well prepared, for when we start the shooting we won’t have time for any discussion anymore. Our common language and the style of the film are developing day by day. 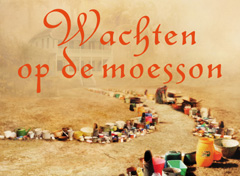 Besides being in this centrifuge, called film – there is my writing. I heard that Norway did a bid on my novel ‘Waiting for the Monsoon’ and ‘Motorrraria’, a beautiful book about motors for which I wrote several stories had it’s launch yesterday – in Holland!
You can follow the making of the film ‘Silent City’ directly on twitter @threesanna