Ages before the final result of my work is visible to the public, projects are in process. Some on a low, others on a high intensity. The idea for my new novel for example is waiting in the deepfreeze and the film ‘Silent City’ is half way its financing. About this film coming month a crusial decision is being made in Germany about the rest of the funding. I keep my fingers crossed and try not to think of it too much. Because when it’s negative, this project will get another serious delay and that’s hard to take in again. 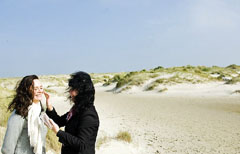 On the other hand there are several other projects that are in different stages of development; the new film-script (on which I work now), little writing projects and a lecture to prepare. Last week I had a photo-shoot for an article in the Christmas edition of a popular women’s magazin. Everything is on it’s way to maturity.