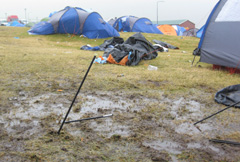 The overwhelming impression of this small group of islands in the middle of the Atlantic Ocean roused not only by the stunning beauty of nature but also by the mentality of the people. The storm that was predicted came. The sky got dark, the rain beats down and the clouds rumble over the mountains. Most audience of the music festival are camping on a hill side next to the village. The wind is mean and blew away several tents or broke their poles. 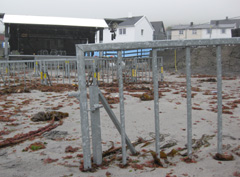 The main stage is on the beach but the waves of the ocean came under it and almost washed it away. When something like that happens in Holland nervous security forces will cancel all festivities and the people will complain. But here, used to the violence of the weather, everybody stays extremely relaxed, parts are broken down, tents are removed and the drunk and happy crowd enjoys the music. I think it has to do with the severe survival mentality of the inhabitants.