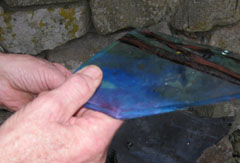 Yesterday I was in Kirkjubøur, where since AD 800 people are living – first Irish monks, later Vikings. But since 400 years the family Paturrson is settled here. I meet Trondur and his wife. He is an artist and explorer. In his studio he paints and makes glassworks that are exposed all over the world. Their house is from the inside totally built with driftwood, one of the few things Kirkjubøur has as a natural resource. 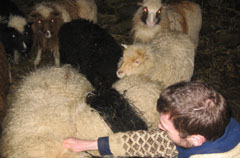 Trondur’s cousin, Joanes lives a bit further on in ‘the oldest’ house of the world. Already 17th generations they reside in this farm, which once was ‘imported’ from Norway, where it was built in 1100. It’s very special to be in a building were people just live but that carries such a history. Besides the sheep that graze in the mountains the family opens their house for special dinners and occasions. So if you want to get married in a really special place… this is where you have to go. 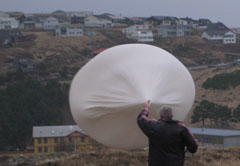 Today I had a meeting with a man who works on the meteorological institute. Arnfinnur explained me everything about how they measure the wind-forces and wind speeds. I want to know all about wind, because he is blowing constantly, today force 8 on the Beaufort scale. 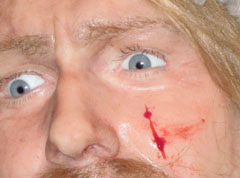 In the afternoon I drove to a little fishing town more north, where I met Gunnar, who built a museum with wax figures portraying the history of the islands. He runs a tourist office as well, and he helped me with organizing new appointments.