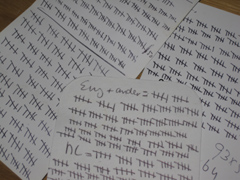 It’s a while ago since I had to travel with my film The Bird Can’t Fly but I’m now on the Madrid-Móstoles International Film Festival. It’s a very small but sweet festival in the outskirts of the Spanish capital. It’s a good way to empty my head before I start my new projects. Although! This morning very early I had to count the amount of Dutch and foreign words in the dialogues of my new film-script(photo). More than 51% of Dutch words seem to be of a crucial importance for a sudden subsidy. It’s quite a ridiculous idea, especially when you realize that the whole film is about not being able to communicate with words. But I count them nonetheless in my Tati-like hotel. 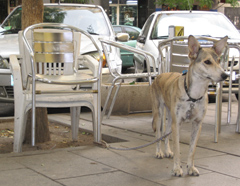 And of course I found some nice chairs for the fans, but I’ll put the entire series on my site next blog.