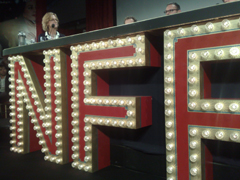 On the Dutch Film Festival they did a reading of a scene of my new film, Silent City. Since my new feature doesn’t have a lot of dialogue I choose the scene with the most ‘spoken words’, which were in Japanese, Finnish, French, German and English! One of the important issues in this film is the lack and the impossibility of communication. The four professional actors did a very good job and it was wonderful to see that what I try to achieve with the script worked. And while I’m gonna clean my studio so it’s ready for a new project the producers are busy with getting everything ready for the European applications.