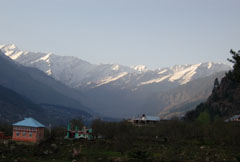 In the mountains of the Himalaya I found the first descendents of the British. Their ancestors were commanders in the British army, who after their retirements bought some land far away from civilization where they started to farm. It were the English that introduced the apple trees to this valley, which is now one of the main sources of income. But the majority of British who were living here left during World War II or died out. These days the city of Manali is a tourist city where hippies and hikers like to be. Everybody in the entire valley knows where ‘the English’ live, but these few descendents, who are now fully intermingled with the locals, don’t like to be reminded of their origin.

It’s a paradise of plastic chairs; even the group of Tibetan hunger-strikers on the market square use them.