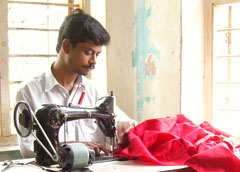 I feel like I’m out hunting. Every moment, every image, every situation I judge on its usefulness. Most of the time, these last days, I was focused on tailors. I made notes of how they move, how they handle the fabrics, how they cut and sew, how they treat their machines. 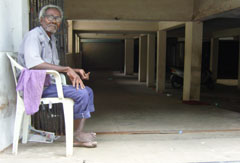 Beside the issues on my research-list I also get influenced by my surroundings. So when I have to wait long behind the counter of a travel-agent, return for the twelfth time to an internet shop because it has problems with its provider, have a driver that doesn’t know the way in his own city or meet a person that is convinced that he and no one else is the center of the world, I’m very happy, because they are a huge source of inspiration. 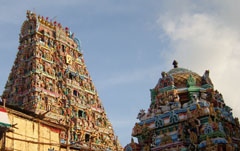 Tomorrow I’ll fly from the south of India (photo = temple in Chennai) to the north, to Kullu in Himachal Pradesh. It is in the hills on 2500m! In the old days the area was very popular among the British as a summer resort to escape the heat of Dehli. I didn’t plan to go that far north but it seems that there are still living some descendents of the British whom I