After a rail journey of 27 hours, in a second class sleeper, I arrived very dirty in Chennai (former Madras), India’s biggest city in the south. Before I started this research-trip I made a list. One of the items was: I want to ‘speak’ to mute people. I need to know and learn more about how they communicate and survive in the speaking society. I started at a school for deaf kids founded by missionary nuns long ago. The kids are taught to use their voice to communicate. The nuns believe this is the best way to keep the deaf away from isolation. On this school I visited several English classes and listened to young, middle and older kids. But even when I could read on the blackboard what they had to pronounce, I understood nothing of what they said. To me it were just harsh sounds.
On the same ground is an embroidery workshop for adults. The women who live and work here are born deaf and dumb. Most come from far away, can’t read or write but found here a dignified existence. I tried to interview the women (without the help of a nun interpreter) but the meeting ended up in a pool of misunderstanding and confusion. Even the most simple and basic questions turned out to be problematic. 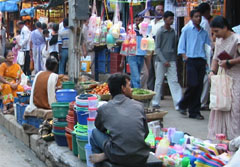 On the market a mute man works as a vendor. He’s been there for years and runs a stainless steel shop. I just went as a customer and bought several items, bargained with him and observed how he communicates with his clients. This man (I’m convinced) had chosen not to use his sound but only his eyes and hands. He could ‘talk’ fast, firm and friendly. 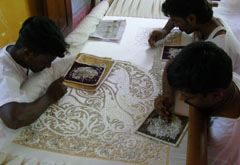 Another mayor thing on my list is: ‘observing tailors’. I got invited in a workshop of a French designer, where they embroider the necessities of the ultra rich. On the floor a group of men was working on a curtain for a bed-room in Paris. To finish this curtain they need 5000 man-hours. It is a sickening idea when you realise that one curtain for a sleepingroom (!) can feed all the poor people in Chennai for at least a year.

I just heard that on the Sofia International Film Festival ‘The Bird Can’t Fly’ won the Special Jury Award in the international competition for creating a unique and magical world.