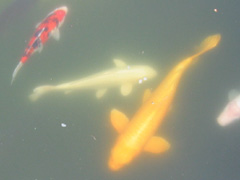 The first draft of my new film is ready ; for one week I’ve been in the world of fish. But now the script is on its way to my producers. I totally forgot to write my weblog, because since today I’m for one week guest-writer on the Trouw writer’s website, a site for new-coming writers, organized by one of the major newspapers. When I was working on the script the news was made public that Dogtroep, the theatre company where I was the artistic director in the nineties, stops at 31 dec 2008. They will make one more show and a book. I think it’s very important that the history and the work method of this group will be recorded for the future