I worked on the first set-up for a new film script. It’s an adaptation from my novel ‘De stille stad’. I had to fight with the strict rules the construction of a film scenario needs. In a novel the writer is totally free, in a film script not at all. I had to delve deep to get grip on the story. I threw away buckets full of favourite scenes and invented new ones to make it work. 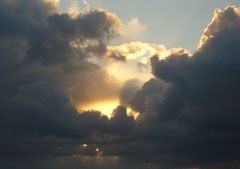 Tomorrow I’m leaving the cottage, the view (both photo’s) and the beach that gave me these last weeks the inspiration to write a film about an overcrowded metropolis.