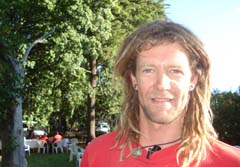 “No, not at all. She is actually very hands-on, and knows what she wants, which makes it a lot easier. She is quite accommodating, and if something has been reset it actually turns out in our favor. We’ve worked in some tight spaces, for instance cramming all the crew inside a tiny bedroom or kitchen, so the props and set dressing gets moved by everyone all the time. I’ve done work previously where the settings were very similar, and it inspired a lot of Threes’ ideas. The characters also inspire the set-dressing and props we choose for them. ‘River’ (played by Yusuf Davids) is the character I think relate to the most. The way he handles loss and anger, how he plans his vengeance and to capture the ostriches… I can identify with that. As a little guy, Yusuf improves by the day, and he is very good with his props too. I glued a feather to his pocket for a scene, and for the next scene it had to come out. Threes, however, got to him before I could and when she tried to take it out he wouldn’t let her because I’ve asked him to take care of it. He is much better with me now, whereas before, he would run off with his props, and I would have to run after him. I’ve worked with kids before, but not where there is a group of 8 or 9 of them as the main sort off force in the movie. It takes a lot of patience.”