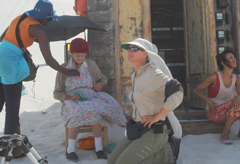 Adri’s eighteenth question: How did you manage such a complicated shot this morning?

We attempted a shot which was like a dance with the camera and a dance with the actors, aiming to reveal more emotion. It was a long shot which took a lot of time to prepare. We set up the camera and decided how the camera movement would be, and then we set up the actors’ actions. We would stop, take one step forward, then one step back, a bit to the left, then to the right, exploring all angles to compose this intricate shot. It was so time-consuming, and every time we think ‘this is it’ an airplane would fly over and we’d have to stop and start again. About 20 airplanes flew over in the while we were doing that shot. It is Saturday morning, and everybody in Cape Town who has a airplane was flying it, but we managed it. In the end we did it.