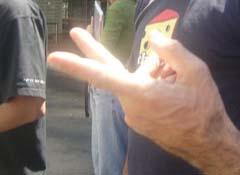 Adri’s third question: Where have you been today?

Oh gosh, today! I started this morning at 07:00, leaving from the office to place where we will be shooting ‘The Bus Stop’ scene, then we moved on to the Boys School where ‘The Kitchen’ scene in the beginning of the film will be filmed. From there, we went to the huge Trovato House where we’re going to shoot the ‘Under ground Hotel’ scene, then to the Convention Centre where we do ‘The Airport’ scene, from there to the office for a shotlist meeting with Guido and from there I went to Michelle’s studio for the casting of the character, ‘Little’. Right now I’m infront of my house again, for a schedule meeting with Leigh and Guido. It has been quite a hectic day.