Today I handed in the final version of my new novel ‘De stille stad’, which will be published in August. I’m preparing a series of lectures about my work, which I’ll give next week in Shanghai, and I’m trying to organise a conference call with my South African casting director. The producers will assemble in Cannes, where the contracts have to be signed while I’ll be on the other side of the globe in one of the most rapidly growing cities of the world. The main reason I go to China is to make and discuss a plan for a project I’m going to do with the Shanghai Theatre Academy in 2007. 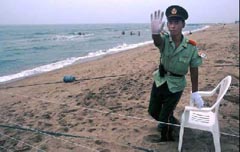 And for the fans, I found another chair lover on internet. Who by the way is right now in Shanghai.
Some of his photo’s.