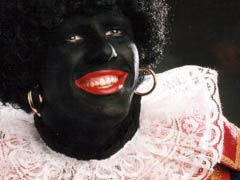 Very often I really don’t understand the world I’m living in. Last Sunday many streets of Amsterdam were covered under a layer of sweets and crumbs after the yearly St Nicholas parade had passed by. His ‘black’ helpers threw so incredibly many sweets to the waiting children, that two hours later even the dogs in Amsterdam were sick and the pavement became too slippery to walk because of the waste sugar.

I’m very much focussed one this sort of extravagant events because I’m setting up a plan for a new novel, in which I want to write from the point of view of a young asylum seeker in my country. Therefore I’m preparing a research project which will take place in Holland and Africa. I’m contacting all sorts of organisations and individuals like Vluchtelingenwerk, Inlia, Amnesty, Defence for children and Samah and tomorrow I will meet Teun Voeten, a photojournalist and anthropologist, who also made this photo of the child in Liberia.