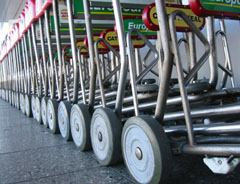 After days of travelling I arrived in Adelaide, according to one of my Dutch friends the most dull city on earth. I don’t know yet but for sure I’ll find out. The last days I have been city hopping. I started in Morisset, a small country town 2 hours north of Sydney, where I slept out my jetlag in the house of some friends. On their former farm – they used to be South African ostrich-farmers – I wrote seven years ago the first version of my The Bird Can’t Fly script. Yesterday I did a lecture in Sydney, which for a big part was about my former work as artistic director of Dogtroep.

Now, after two days of history and 38 hours of plains, trains, cars and taxi’s, I’m in Adelaide to prepare the laboratory of Time_Place_Space. Slowly it is revealed what is expected from me, but as long as it’s still not totally clear I’ll try at least to understand the place where I’m. Adelaide, they told me, is the city of serial killers and churches. That’s at least a very interesting combination.