Research in Tokyo part 15:
Beside a lot of talking, I’m constantly observing this world. And my opinion about the people here is changing. The silence in the subways and trains, which I first saw as tolerance and flexible, I interpret now very different. I give you some examples of a few things I saw the last days.

Tokyo is not disabled-friendly. Everybody has to climb high stairs to exit the subways. A young mother stood in front of the stairs. It was impossible for her to climb it with a baby on her back, a child in a buggy and her bags. Around her hundreds and hundreds of people ran up the stairs to be in time for their meetings or work. No one stopped to help her. She started to untie the sleeping boy from the buggy, took him on her shoulder, on her other arm she hold her shopping’s and started to climb up while she pulled the buggy behind her.

Yesterday I was in the train and an older woman stumbled, her bag fell on the ground. Most of her belongings got spread around her. Again no one even turned his face. 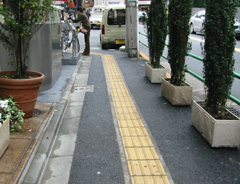 Why I stayed an observer myself?
Because I wanted to see what happened. I’m confused. Their flexibility I judge now as selfishness. I get the impression everybody has an invisible wall around him or her. Impossible to enter. And I also do experience that myself over and over. 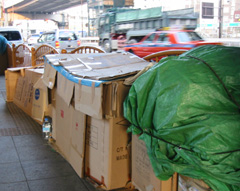 Homeless at Uneo station. The same happens with the homeless. In nearly every park you can find complete villages of blue tents. I read in a newspaper that Tokyo City counsel asserts they only have 500 inhabitants without a house!
I can tell you this is an absolute lie. 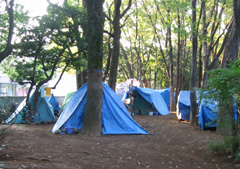 More info about the homeless