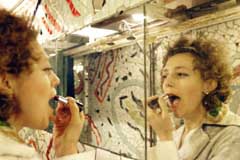 Although I seldom add private matters to my weblog, today I will. For today my friend Ineke Schwartz died. She was a known art journalist and a very special woman. Two years ago she heard she had a rare form of cancer, DSRCT. The malignancy most commonly occurs in young males of adolescent age and is characterized as a large intra-abdominal mass with no apparent origin. Since this lesion is normally not attached to an organ, it usually grows to a very large size and spreads to parts of the body before the person experiences any ill effects of the disease. Since DSRCT is very rare, probably less than 200 cases are reported and nearly all of them died. 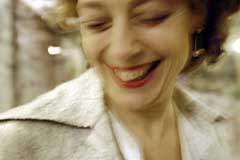 When Ineke became ill we started an exchange of letters about fears and hope, about dying and death. We were planning to make a book out of it but her illness went much faster then we could imagine. After two operations, seven chemotherapy’s and lots of alternative treatments, today at 16.00 Ineke died of active euthanasia. While outside the spring sun tried to reach the earth, she stepped into eternity.