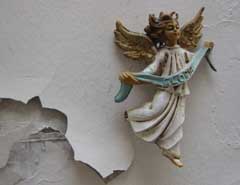 Working on an international film script is like throwing yourself into a hell. As long as you’re alone with your laptop, it’s fine, but on the moment you open your door ajar the ‘real’ world enters, with incomprehensible comments, nicely meant suggestions and unasked for changes. It’s all up to you how strong you feel and convinced you are about your own story.
I just came back from Bombay with my first draft of ‘War for a Kiss’, the film about a western girl that matures into a woman in the East. I got loads of comments and suggestions. It was very interesting (= hard) to hear that my producer (who’s never been in Bombay) doesn’t understand how a girl can be ravished by a city, and that’s the story I want to tell. Then I got a mail from Paris. A young woman who read my web-site wrote: “I was in Bombay last June, and it was kind of a coming of age experience. I became a woman… and there were many experiences I had there that I’ve no one to share with, because its just too difficult to explain.”
I knew it! It’s up to me to get it right on paper.