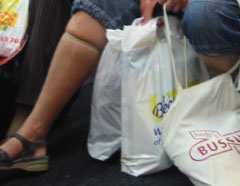 The life of a writer-director takes place for a good deal behind the show, so at times there’s not much to tell… But today things were different.
I was one of the writers that was invited to give a reading on ‘de 50 + Beurs (the 50+ fair). This event is announced as the world’s biggest event for active people above fifty. Biggest? Perhaps. But active… We had to read in front of a crowd that was mainly interested in a chair to sit on, for most of the “audience” was exhausted after hours of walking in the midst of screaming voices telling about anti corn cream and massage saddles. We all had a very bad time.
But on my way home I got good news. My debut novel ‘De kus van de weduwe’ is gonna have its fourth print! (Chaja Polak and me signing books on the fair)