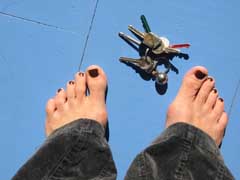 It is a cultural shock being back after six weeks of Bombay. Not because Amsterdam (the city where I live) is perhaps cleaner or very differently organised. No it is the extreme patronizing attitude of the local authorities. 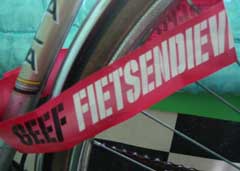 Yesterday I came back from seeing a movie and I found my bicycle with a colourful paper ribbon with the text ‘DON’T GIVE BICYCLES THIEVES A CHANCE’. The police gave me this decoration because my bicycle, which was double locked, was not lock on something! But last time when I did that (2 month ago), they cut my locks (!) and took the bike away because I had locked it on the wrong spot.
After living for six weeks in the city where you can spot survival of the fittest on every street corner I felt a foreigner in my own city.