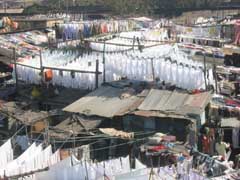 Getting deeper into it. Yesterday I went to a concert against AIDS. My friend Abbas works for MTV who organised it but when I arrived it was already so full that the police was trying to control de masses by beating them up with bamboo sticks. And they beat hard. But having friends means, entering through the artist entrance and see the concert from the first row.
I went deeper into Bombay, trying to understand what will happen to my main character. Billy an innocent young girl becoming a woman. I go back to the Mahalaxmi Dhobi Ghat (photo title), the central washing place. Hundreds of men live here. They are washers. Standing in the water all day beating the clothes clean. 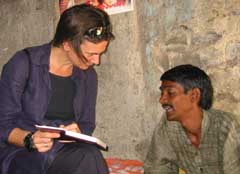 Outside I meet a boy. He wants to be my guide. I don’t want one but we chat a bit. ‘You’re from Holland! Please can you send a letter to my friend in Rotterdam?’ It turns out he is a illiterate.

I want my main character, Billy, to go to the Moslem area, during the Ramadan around sunset. A hectic street with thousands of people and countless screaming food-vendors. The sun goes down. All of a sudden everywhere small gatherings centered round a display of food. The muezzin, the voice of the mosque, calls loud out of the speakers. Silence descends over the crowd. The noisy moving swamp of bodies of a few seconds before becomes a spiritual praying mass of silently eating people. Slowly life starts again. The vendors swop places; food makes place for sandals and toys. A few minutes later the hectic life reappears like there never has been a silent moment.