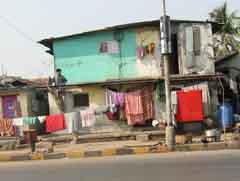 The advantage of the ground-floor is that I see my neighbour. He is the brother of my landlord and always looks through my window. Sometimes for more than an hour. Out of his mouth drips a thick dollop of saliva. He doesn’t move. Sometimes he growls a bit. I know by now that he soon will be gone again, to return tomorrow morning. I just try to deny him. He probably just wonders who’s that white creature moving her fingers on a hard piece of plastic while looking into a television. But this mentally disturbed man gives me inspiration. He doesn’t want to harm me, he just watches. I always greet him when he arrives and when he leaves. Then there is the guy who sells fish. He normally passes by around 9.30. The first days I didn’t know what he was selling. He shouted in Hindi. But yesterday I saw a fish-tail peeping out of the bowl on his head. 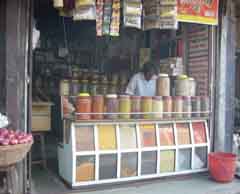 (The shop around the corner) Billy, the main character in my Bollywood film, is a young white woman alone in Bombay. Every day I’ll make a walk. Trying to reach my limits. Yesterday I was in a very slumpy area where little kids threw pebbles at me. This is weird. Normally I never ever find that sort of aggression. I’m used to people standing and gazing at me or men approaching me shyly if I need help. And the beggars of course. But when I walk alone that seldom happens. It is so uncommon for a white woman walking about alone; like it is uncommon to see a woman sell fish, drive a rickshaw or do any sort of middle class labour.