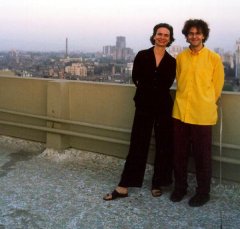 6 Jan 2000 Back to the Amsterdam where everything happens according to fixed rules.

The last day. I can’t help it, but I am so happy to be in Bombay again. The sky is blue and it is 33 degrees.

I try to make an appointment for one more interview, but I don’t manage to get one. Furthermore we have to take a picture of one of the people we have interviewed, because his picture went wrong. And buy a bigger bag so that I will not have any problems with my hand luggage tonight.

A part of the strike is over, so we take a rickshaw to the station. Again in the train. The whole time I trying to understand why I didn’t like Calcutta. Is it because here I see image after image in the streets. Images that do not surprise me anymore. But these are the images that I was looking for, and I have found them here. I am not shocked anymore by the poverty and the dirtiness, but I am still surprised when I see it. I try to imagine how this will be in my film in a few years.

How will it be, to be back home in the Netherlands tomorrow? Where everything happens according to fixed rules. Where every hole in the streets is secured by a fence. Where the cars are shining and are driving between lines. Where the shops close exactly on time. Where household rubbish is picked up at the door twice a week. Where we have vacuum cleaners for dog dirt. Where everyone has a roof over his or her head. Where the food lies on the shelves so that you can fetch it yourself. Where you hardly ever hear anyone hooting. Where every car has its M.O.T. test yearly. Where all pipes are hidden under the ground or in the walls. Where the houses look freshly painted. Where we sleep in beds with thick mattresses. Where we wear dark colours. Where almost everyone has short hair. Where we cook in pans with handles and where gas cookers usually have four rings. Where we can drink the water from the tap. Where it takes two times fifteen minutes and eighty guilders to get a passport. Where we can say what we want. Where we ride in mixed trains. Where not everyone has servants or is a servant. And where we think that the country is full.
I am going back to that country. And now I am at the airport. I have checked in and have passed the customs. But when I am honest I would like to stay. I have just started to discover a river and I want to get to the source. Everything else is far away. I would like to make the next step now.

We walk along the beach for the first time in six weeks (there is a beach along one third of Bombay). With my feet through the water, my face in the sun. I think of all those people I have talked to. Of all their stories. In my head I am already writing the script. A complete different story, but I know where it happens. Here.

I wait for my plane. I am surrounded by big white people for the first time in weeks. My visa will expire in one hour.
Goodbye Bombay, city of rats and gold. I’ ll be back.