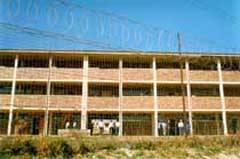 Last day in the dangerous city. I am at the airport. On my way to Holland.
After an interview with the alderman for housing I suddenly realise that the hostel in Alex, the township we visited the first few days, isn’t really that bad. Alex appears to be 3 times fuller than possible. Instead of 250,000 people, there live 700,000 people. This is a shocking figure.
It was another day of so many visible consequences of violence.
We drove past the neighbourhood’s Spar (shop), a stone’s throw away from our accommodation. Yesterday a security guard was shot there. Outside there are some flowers.
This morning we drove to the petrol station and just as we had driven away there was a bank robbery just behind us.
We get excited. Want to see it. Or, maybe better not. And we drive off. On our way to our interview we see some people fighting on the street, and one man pulling a gun. We still are enjoying us. It’s just too much. We leave the windows open so the bullets at least won’t break the car windows. Just in case. No, it’s really extreme here. They also complain about violence and crime in the rest of Africa. But it’s nothing compared to Johannesburg.

The interview with the alderman is a beautiful final conversation. I spoke to 52 people. Most of these interviews are registered on video, a part on tape and a few in writing. The alderman is a 33-year-old black man. Wise, mature and driven. A considerable difference from the many failures we spoke with.

After the interview I want to look for a homeless man who lives in a hole he dug for himself in a park near Yeoville (part of Johannesburg). When we get out Cathy says, “Well Threes, nothing has happened to us until now, but if we want to, this is the place to be”. I hide my credit card in my knickers in case I will be mugged. But in one way or another I know nothing will happen to me. I just feel it.
The place is a deserted, totally filthy park on a hill (a koppi). And in between there are those places for praying. We search the whole place. But we can’t find the man.

We drive around a bit. We see totally neglected, old residential neighbourhoods, full of junkies.
The old house, where we lived in ’94. The environment is dangerous to life. Or not. I don’t know. I constantly imagine (in my mind) that I am walking under a stopper. A superstition against robberies. Cathy said, “let’s make it into a bullet-proof stopper”. And this is the way I lived here.

My flight is announced. I have to go on board. Carrying my notebook with the first material for my film.