An artist, a striker and a mayor What a day today. Here I am, thinking I will get a complete picture of the society and I forget my own sex. I have only interviewed one woman until now. After all those conservative pricks of yesterday, today only women and what women! 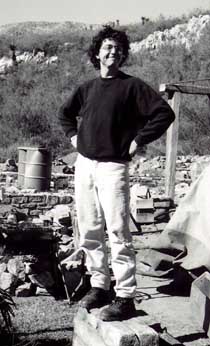 Paolo before the interview

This morning I started with a woman who lives with her 13 years younger husband somewhere far away in the mountains. They don’t want to have contact with other people. She paints, he makes tools. It was an incredible place. I would have wanted to live like that. It looks a bit like our dream. And it was really nice to hear something else than politics and frustration. Then we talked to a striking woman at a supermarket. They have been on strike for a week now. Too low wages. They only earn 53 guilders a week there. And everything is only a bit cheaper than in Holland. You could really do something to an owner like that. What a jerk.
The nicest interview was with the deputy mayor of Oudtshoorn. A real tigress. Coloured. A double handicap in this white, male bastion. What fire, what power, what an old-fashioned feeling too. In Holland there already has happened so much with regard to women’s lib. Right now I can’t give this a place in my head in relation to the story for the film. It doesn’t give me enough visual images.

Threes and Cathy after the interview

Do you manage to get through my stories a bit? Or is it too abstract. Is it only my imagination that has gone overboard? Today Cathy and I have said that it feels like a mission. It is so real, so under the skin, so deep in this incredible country. I know that it will change me again. And it changes my vision on people again. I want to do the same thing as I wanted at the Dogtroep, I want to understand them. I want to know what they mean. I want to know why they want the things they want.