Graveyard, rubbish dump and no go areas I walk in the streets and I see another cortege. Of course this happens more often if you stay in the neighbourhood of such a big cemetery. But this time it is a black funeral and a very big one. I follow it. I jump over the fence, take a short cut. Then I run for around a kilometre across the cemetery. I find them. There is a big tent next to the hole. There are hundreds of people. A choir is singing German church songs. And again those beautiful circles of emotions. The minister is in a hurry, but he speaks seriously to the crowd that they must stay to honour Mr so-and-so after he has left. The women have to stay while the men are filling up the grave. There are as many as ten people who are working with spades at the same time. There are large clouds of red dust above the crowd. I am sitting a bit further down, on the grave of Anna Van Der Reis, who died in 1993. It is beautiful to see. And in the meantime the choir just keeps on singing. When the grave is finally closed, people are slowly leaving.

We are trying to find Prince, the boy we met a few days ago. He will bring us to his father, who works in an old people’s home. And who is a famous black musician. But first we look round his shop. He isn’t that homeless. He has squatted a great garage. It’s very light and very clean. Extremely clean and organised. His bed and a cooker are placed in a corner of 1.5 by 1.5 metre, just as in a normal shack (a ‘house’ of corrugated iron or cardboard). The rest of the space is filled with sorted mess. Very tidy.

I want to see the factory where all those people live and he has to bring me there. At first he doesn’t want to do this. Not just looking. But if I tell him that I also want to talk with people, it’s ok.
Imagine, a gigantic factory, in the middle of the centre. Everything is broke. Full of dirt. Rats are walking around. The smell of death and decay, and all cardboard shacks among that. In very tidy rows. You can put a ruler along them. Fires everywhere. And clotheslines. Everything is so full of contrasts. In fact it is just an ordinary bourgeois picture, but than on a rubbish dump in a factory. It’s almost impossible to describe the contrasts. You can only see and smell them. We talk to no one. We just walk and look around. Prince is very afraid too, so it’s time to move on. No video.

We drive to Alex. The only township in the city. It’s also the oldest township. Nowadays everybody says ghetto in stead of township. The word ghetto is often used in conversations with blacks and coloured. It’s Sunday. Everybody is at home. It’s busy. We drive to the old people’s home. His father isn’t there, but his uncle is. An old people’s home in an African township seems impossible. All families still take care of each other and are very close. But here you find the dumped people. Mainly staff of whites, they became to old and had to leave. Most of the time they had already lived with such a family for more than 40 years. And they lost touch with their own relatives. Where did they have to go? Here. It’s an oasis of peace in the rubbish and filthiness of Alex. Suddenly there is grass and there are trees. There are small houses and old people everywhere, sitting on chairs and chatting. There is a hospital and death-rooms. Eric, the uncle who leads us around, is worried about the changing norms and the westernising in Africa. Who isn’t? Suddenly he proposes to go to a hostel. 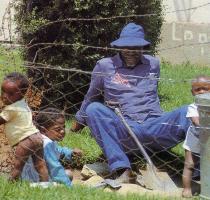 My heart misses a beat. Wow, a hostel. One of the most dangerous, and impossible places in the townships.
For many years these were the places where there was so many aggression. Inkata against ANC. And the other way around. No one came close to them, many people died daily. But now ‘the rest’ has returned a little bit. Eric is looking for a guide. You can’t just go in there. That is even now still too dangerous. Especially for whites. Ephreim comes, a man in his fifties who really wants to show us the building. I always thought it was only one block of flats, but it appears to be a real fortress, built in the shape of a sort of pointed egg. You don’t believe your eyes when you are in the inner courtyard. All kinds of levels with on the strangest places broken cars with people in it. Talking, smoking, et cetera. Clotheslines with laundry and in between hundreds of goats and sheep are scratching about. And everything is covered with dirt. Lots of dirt. Dirt of years. And nobody cleans it up. Now, everything is squatted in. There are fires are everywhere.
The hostels were places where only men lived. As a matter of fact it were a sort of hotels for immigrants who worked in the homelands. Only men. Around 2,500 to 3,000 men lived in this hostel. Now a little less. And now there are women too. It’s squatted in now. We are absolutely not allowed to film in here. I can imagine why. It is too much, too heavy, too dirty. It is the perfect example of what a ghetto really is. Jesus, what a misery. We enter the fortress. It is possible to lower electrical gratings everywhere so that different parts can be closed off (in the old days!).
We go upstairs. A bad smell of piss. The floor upstairs is covered with mud and it is completely dark. Vaguely you see some doors. There is no daylight anywhere. We walk into a corridor. There is someone who wants to show us his room. His name is Ernest and he has lived here for 20 years now. He has lived through almost everything. When he was a child he came here with his father. He slept with 4 others in the room where he now still lives. Nowadays with his girlfriend. In a room of 4 by 4. A double bed and a wardrobe. The wardrobe is open. There is some food and some clothes in there. That’s all he has. It is very tidy and clean.
We walk further and arrive at Ephreim’s domain. He runs a little shop in one of the rooms. You can only open the door (inwards). There is a fencing. Behind it everything is filled with cans, et cetera. His daughter stands behind the counter. He has another room that is used as a beer storage room. There are clearly several locks. And at the same time it is someone’s bedroom. Then we see his own room. Blue-white lino on the floor (remnants), a double bed and a single bed, a wardrobe (overfull) and a TV. And well, than it is quite full.
Back in the corridor. There is a small light at his shop. The rest is dark. Dirty, piss, mud, filthy. He shows us the toilets. You immediately feel like throwing up. We skip the showers. They are smashed and full of shit and rubbish. There are doorsteps everywhere (in connection with the gratings that were used to close parts off). You don’t see them. You must know they are there. But if you have lived here for 20 years than you don’t stumble over them.
We arrive at the communal kitchen. Four tables full of gas burners. A few of these burn constantly. There are paint cans, with handles fastened to them, cooking on the fire. The paint still on the outside. Someone is making doughnut balls. The African doughnut. We buy some. They are 30 cents a piece. I ask them where the gas comes from. “From the ground, through a pipe”. Yes, I can figure that out. But who is paying for it. Nobody knows. And the fire burns the whole day. You would think that someone has to pay for it. They don’t, that’s for sure. We make a new appointment to return here and than we will be allowed to film. They want to show us some dances. I am curious. Outside there’s a boy selling tomatoes and some cassettes. The music is loud. The tomato seller is dancing. It seems as if he doesn’t touch the ground. I never saw something like that before. “If you will come again, they will dance, not one person but a lot of people, and just like him”. Well, that sounds promising.

We are outside again. Among the thousands and thousands of shacks. It looks like a complete chaos, but there is a whole network of streets going through it. It is so full, so full, so incredibly full. I had forgotten how it was.