In preparation of my first movie I go back to South Africa.

Paolo Rapalino (photographer and cameraman from Italy) and Catherine Henegan (visual artist from Johannesburg) will help me and join me. It’s so nice to be here again. It almost feels like coming home. Roam through the city for the umpteenth time. Meeting people. Making appointments. Fortunately there are people who enjoy that, making appointments. Calling up people. Sweet-talking et cetera.
We are staying in Cathy’s house; it’s great, large and rich in colour. An old gardener lives in a little house in the garden and a friend of his squatted Cathy’s garage, I think. When we came home last night, we saw candlelight in the garage. And Cathy said: ‘So, everybody is at home’. I want to interview them.
Jul 25

When you stay a little longer in Johannesburg you notice that a lot has changed here. The whites are moving away and are creating white towns-hips. No luxurious residential areas with guards, but small middle class terraced houses with high walls with electricity on them. And in the centre I have only seen one white man. The large, empty building (500 metres by 100 metres – really high – one space) near the Market theatre is built over with cardboard houses. You don’t believe your eyes. I want to go in, but I have to find someone who wants to take me there. It’s a bit dangerous to just go in there.

I have talked to a box collector on the street. Male, ±43, unemploy-ed, 7 children, wife and mother. He collects empty cardboard boxes from the shops (rubbish) and sells those boxes back to the cardboard factory to feed his family. He earns around 30 guilders a day. But if I ask him about the future he doesn’t know what I am talking about. There is no future. Even when I talk to him about the past. There have been so many changes in the last 10 years. But he still can’t imagine that there will ever be any changes in his life. He thinks he will never find a job. He is so nervous that a white just talks to him that he lights the cigarette that I give to him at least 3 times while it is already burning, again and again, and he just doesn’t notice it. 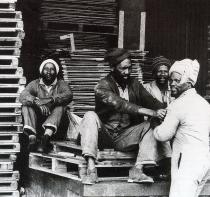 Conversation with Prince, 30-years-old, reggae, no home, no wife, no children, unemployed, black. But when you talk to him he appears to be one big sun. He does not know fear. Is never afraid?! He always helps people everywhere and in this way people are giving him food and clothes. He paints here, does the laundry there, and always hangs around the theatre. He makes music. He sings a song that he has made for me. All positivism. And slowly the conversation turns to the future. When I ask him how he think he will die, he says he does not want to be murdered. That he will fight until his arms are broken. Then he suddenly says: “Once I saw a movie. License to kill. James Bond. That is impossible. There is no license to kill. Who can grant such a license? Some people believe that having a gun is the license. But what if you think that you will be shot first.” Then he starts laughing very loudly about this ridiculous idea. He is a very endearing man. He has only one dream. The Market theatre will be his palace. Everyone who wants may live there and there will always be food. When I ask him who will be the boss in his palace, he says, “a Muslim woman”. He blushes. He must be in love. But on second thought it would be his brother. And I think he would like it best to be God. Who gives everything to everyone from the balcony of his palace.
After our conversation we take him to a restaurant. Because it’s like this. You really love to give him food, and so do we. A real prince. Prince in front of his house

Over here there is also a sexual revolution. An explosion of ‘coming outs’. Mainly by white and coloured males. And so suddenly there are places in car parks were gays are sniffing at each other at night. E.g. diagonally opposite from Cathy’s house in the park. The most beautiful young boys, mainly transvestites, hang around. It may be an idea to interview them.

Paolo arrived safely. Only without his luggage, which got lost. Let’s hope it will arrive.

Close to the house is a very big cemetery. When I was walking there this morning, a funeral just started. Imagine, a gigantic field of at least one square kilometre, but proba-bly even much larger. Full with graves. And all with the front to one side. And halfway walks a line of people with a coffin. It’s very cinematic. The way they follow goes along small sandhills of red earth. They stop at one spot and stand around the coffin. There are not many people. Around 35. And all with different emotions. The closer they are standing to the coffin, the more defeated they look. The further away they stand from the coffin, the more relaxed they look. It’s beautiful to see this. There are two persons standing a bit in the back who are smoking a cigarette in a relaxed manner. While 5 metres before them someone can hardly cope with his grief. Some children are running around between them. When the minister has left (after ten minutes) the men are starting to fill up the grave. In an almost hysterical way. Indifferently the others walk away. After 20 minutes or a bit longer there are only two men with their wives and one child left. Everyone has left already, his or her cars included. The grave has been filled up. They cry and walk away still crying.
After they have all left I walk to the place itself. It is a whole row of holes of 2.5 metres deep, future graves. This explains the way with sandhills, with in between a few filled up graves covered with fresh flowers. It’s unbelievable that nobody has fallen into such a hole.